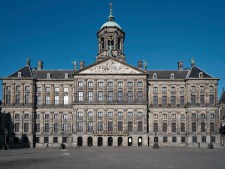 As soon as you walk onto the Dam Square in Amsterdam, you can't ignore it. A large stately building between the Nieuwmarkt and the Kalverstraat. In total there are only 2 palaces left in the Netherlands which the Royal Family still uses, the Royal Palace on Dam Square is one of them. It is not the case that the Royal Family lives here but guests are welcomed and it is used on official occasions.

Did you know there are a lot of people who think the building was built as a palace? There are also many people in Amsterdam who think this, but this isn't the truth. The building was built about 350 years ago as town hall, it had this function until 1808. If you look closely around you, you can still see clear features of a town hall. It was not until 1808 that it was King Louis Napoleon who renamed it as a Royal Palace. From that moment on, this didn't change until now and hence it is still a palace. In the meantime, there have been several people from the Royal Family who have lived there and received their guests.

During your visit, accompanied by an audio tour, you can walk through the palace on your own to see everything. You will have a look, among other halls, in the Burgerzaal, this is the large central hall. You'll find the statue of Atlas here and there are curves in the floor simulating the eastern and western hemispheres and the galaxy. This should give the feeling that the citizens of Amsterdam had the whole world at their feet. Other interesting places in the Royal Palace include the Schepenzaal, the Krijgsraadzaal and the Vierschaar. You will discover art, furniture, paintings and many more beautiful objects.

Tickets are available online but also for sale at the door. The entrance includes the audio tour free of charge. With a museum year card or I Amsterdam Card you can enter for free.