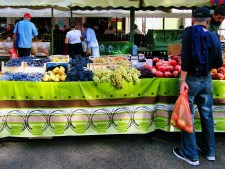 The Albert Cuyp Market is one of the most famous markets in the Netherlands. It is therefore certainly an absolute attraction and a great opportunity to discover Amsterdam's multicultural society. Enjoy the colors and scents but also the beautiful high-profile market merchants and the visitors who sometimes come here every day. On the market you come across people from all continents and from all religions, it has become an important point of Amsterdam unnoticed.

The market originated in 1905, so it's over 100 years old. This makes it the oldest market in the Netherlands. The length is about one kilometre. The market is named after Albert Cuyp, he was a painter from the 17th century.

In the beginning, the market was nothing more than a bunch of street vendors who stood here without any plans to sell their products. It was a mess and it was a nuisance in the neighborhood. There appeared to be demand for the street vendors, so the city of Amsterdam started the plan to make it run in order from 1905. The first few years the market was only accessible on Saturdays, but in 1912 it was decided to leave the market open 6 days a week. Because of the hustle and bustle it was no longer possible for traffic to go into the street. This is still the case at this point in time.

Did you know that the most famous folk singer in the Netherlands was discovered at the Albert Cuyp? We are, of course, talking about the famous André Hazes. The man (unfortunately deceased) reached the entire Dutch people with his songs. He hit you and still everyone can sing along his songs, young and old. The singer was discovered when he was singing on the market, this was the beginning of an eventful career.

The market is accessible for people with reduced mobility. Keep in mind that sometimes it can be very busy and that it is difficult when you are in a wheelchair or are poorly on your feet. The market can also be a challenge for people with strollers.