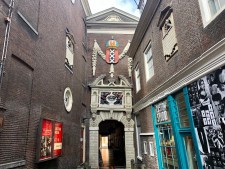 The Amsterdam Museum presents the story about Amsterdam. This is for tourists as well as for Dutch citizens. Through a journey through time you will be taken from the early Middle Ages to the present time. Here, of course, all the important moments in the history of the city are covered and exposed.

History of the museum

The museum has been around since 1926 and was part of the Stedelijk Museum at the time and was based in De Waag. For a long time the official name was the Historical Museum, but after moving to the current building the name was changed to the Amsterdam Museum. By the way, did you know that the current building has served as an orphanage for decades?

The Amsterdam Museum has a collection of about 80,000 different objects. About half of these come from the city itself and the other half is collected from donations from companies and individuals. In addition to the collection in the museum itself, it also has various objects in other locations. Think of the Beurs van Berlage and the Stadsschouwburg. A large part of the collection is also visible online.